It seems the beach continues to offer me new friends to chat with. This morning it was a crab, who made me jump when s/he moved just as I drew near. I was glad though, that s/he stopped so I could take her photo and wish her a good morning before she scuttled away.

So, of course, there’s a poem, because it’s Poetry Friday: 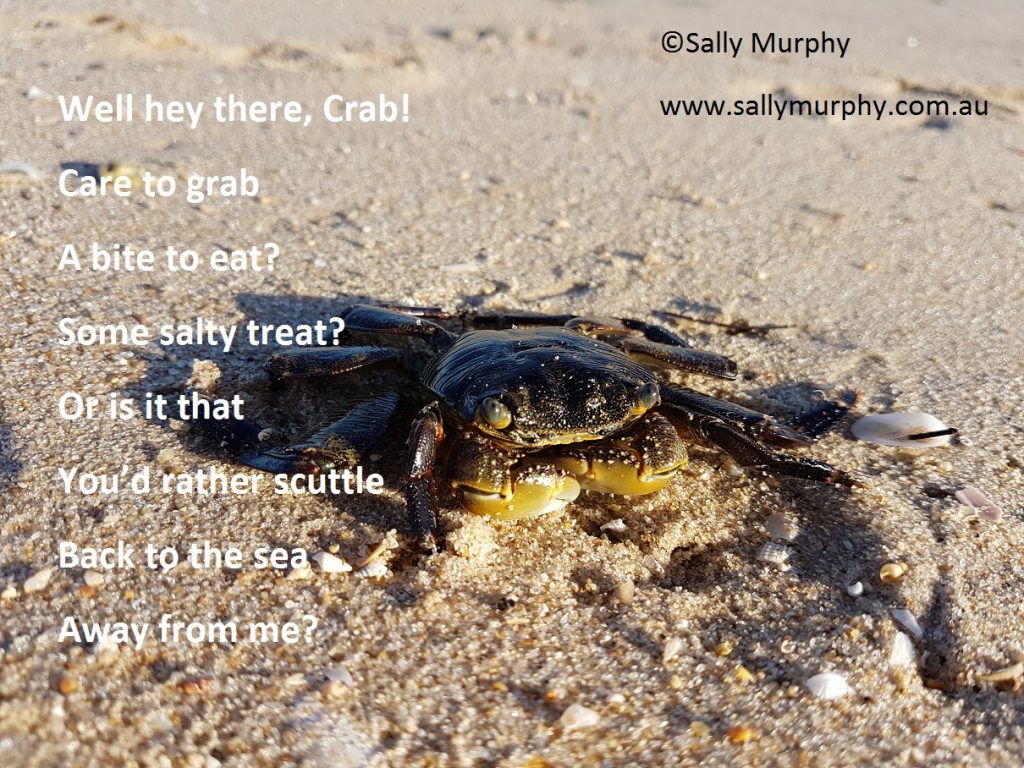 Now I’m off to think about the crab’s reply might be.

Have a great St Patrick’s Day, and don’t forget to check out the Poetry Friday round-up, which today is hosted by Robyn at Life on the Deckle Edge. 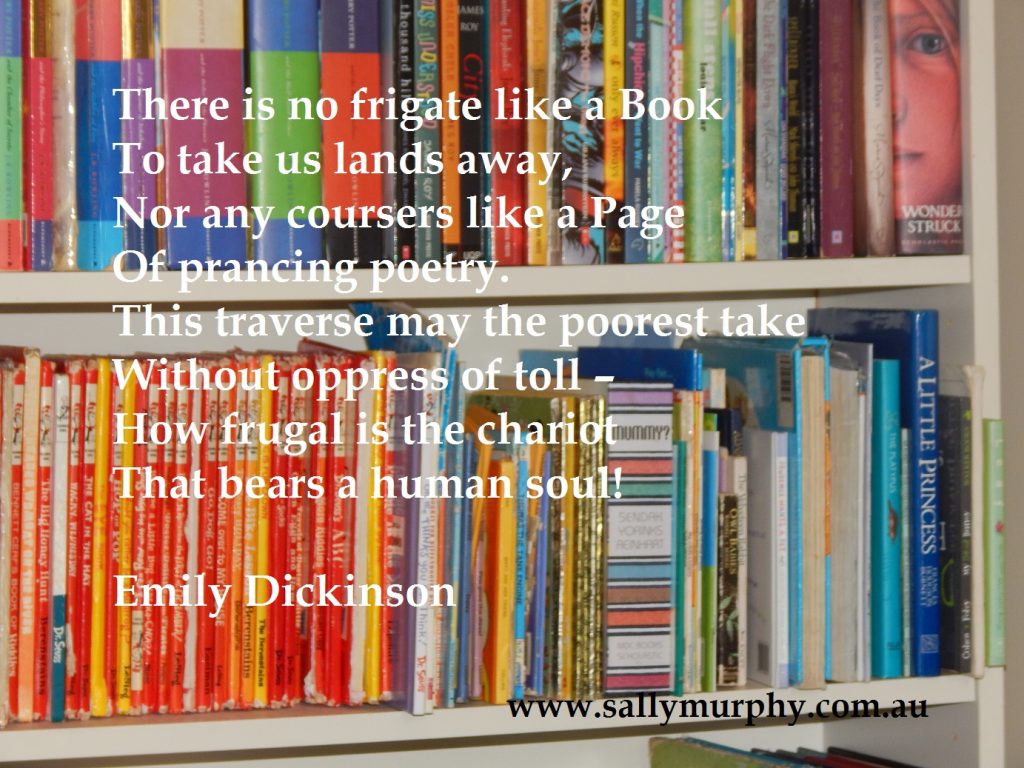 Phew. It’s the last day of July and I’m weary, but in a good kind of way. It’s been a really busy month: new book out July 1, two conferences interstate and a writing retreat a little closer to home, progress made on my Doctoral project AND two new book contracts. In the midst of all that I posted more than forty new blog posts here on my website, most as part of my Five Minute Promo Challenge. And it’s this last I want to reflect on today. 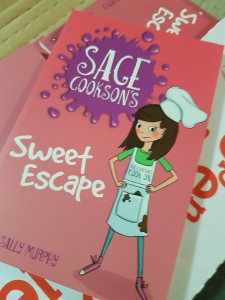 Back in June when I was planning my month, I realised that with Sage Cookson’s Sweet Escape coming out at the start of the month, and all that busyness following soon after, I realised that if I was going to promote Sweet Escape effectively I was going to have to do lots of small things rather than one or two really big ones.I started making a list of the things I could do – and, pretty soon, the Five Minute Promo blitz  began. Every day for the month I did a quick five minute online task to promote the book. And, because I realised other authors and illustrators might be interested in quick things they could do to promote their own books, I shared each new idea here on the blog and on Instagram.

Ideas ranged from taking a styled photo of the book for Instagram, to setting up and maintaining a Facebook Author Page, to Tweeting about the weather. If you want to see the rest of the ideas, you can find them here on the blog.
So, here’s what I learned:
1. There are lots of things which can be done in five minutes (or less) to promote a new book, or even a backlist title.
2. Planning ahead makes promotion simple. I wrote my list of 31 tasks on my whiteboard and photographed each task as I added it to the list, so I had not only the 31 tasks, but also an Instagram-ready photo for each day. This meant that all I had to do each day was carry out my task, and post the new task on Instagram. I also wrote a quick blog post about each task, explaining it to those who might be interested. Again, I did these in advance: writing them in blocks of four or five as I had time. It’s amazing how much work you can do on an airplane if you choose not to watch a movie.
3. Most of the tasks could be completed in five minutes or less, but it is easy to forget time and keep going well beyond five minutes. If you want to promote in only five minutes you must be careful not to get distracted by the social media platforms you are using. 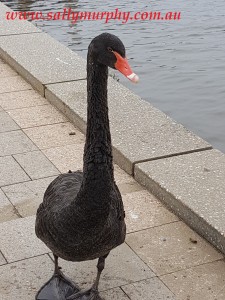 4. Variety is the spice of life. Because I mixed the tasks up over the month I didn’t get bored. I had Each new task was slightly different from any other, so I was kept on my toes coming up with new content, new ways to spread the word.
5. Regular posting boosts engagement. Actually, I already knew this, but this time I decided to measure it. At the start of the month I recorded how many followers I had on Twitter, Facebook, Pinterest and Instagram. As the month progressed, I checked these regularly and tweaked what I was doing. The most obvious one of these was on Facebook, where I had only a couple of new followers to my page until I followed my own advice and sent invitations to any of my Facebook friends who I thought might be interested in my author page. This lead to several new followers, and a direct link to the page from my personal Facebook wall reminding my friends that all my writing news was on my Facebook page lead to several more. Over the course of the month I attracted 38 new followers. The number was higher on Instagram (73 new followers) and Twitter (99 new followers). The lowest increase was in Pinterest, where I attracted just 1 new follower.

Of course the number of followers is not always an indication of engagement, especially on Twitter, where people can retweet your tweets on that topic(which are this seen by people who don’t follow you) and also search by hashtags and see your tweets without following you. Instagram similarly uses hashtags, and Pinterest does too, to a lesser extent, and in both of these again people can see or share without necessarily following you. On Facebook, the posts which had the most views were those which people shared, and were generally the posts I made not directly about my books – such as interesting blog articles relating to children’s literature.

So, I blogged and tweeted and instagrammed and pinned and facebooked and more for a whole month. Measuring success in terms of sales is difficult (being traditionally published I tend top see sales figures twice a year) but as well as the new followers I have noticed interest in Sweet Escape not just from friends but from people in the industry. At both the conferences I attended and the writing retreat, people mentioned the 5 Min Promo challenge and/or Sweet Escape, based on what they’d seen on social media.

For me, then, the measure of success is that I had fun and also managed to spread the word about the book. Would I do it again? Of course – especially seeing I try to use social media every day already as part of my long term promotional strategy. But first, I might take a little nap. 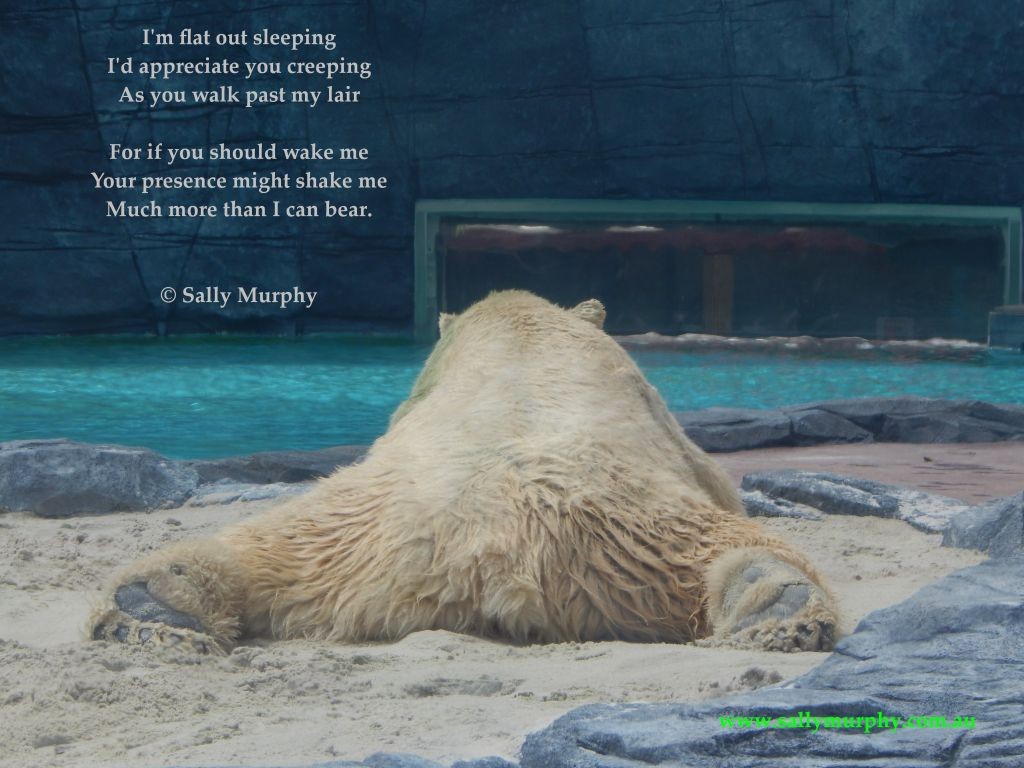 It’s Poetry Friday and I’m still thinking about my holiday to Singapore, even though I’ve been back for a month.

This first photo was taken at Universal Studios on Sentosa Island. There are two roller coasters in one – known as duelling roller coasters because both run at the same time – and yes, I rode them both, with one of my sons. So much fun! And just a little bit frightening. 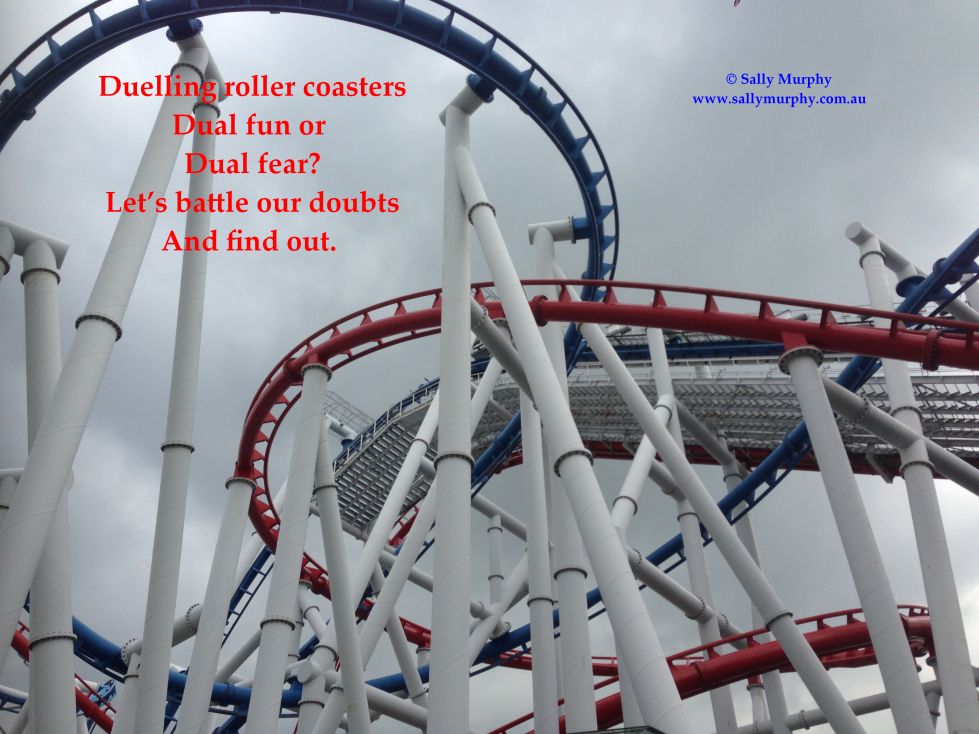 This second poem was taken from a Bum Boat as we cruised down the river. 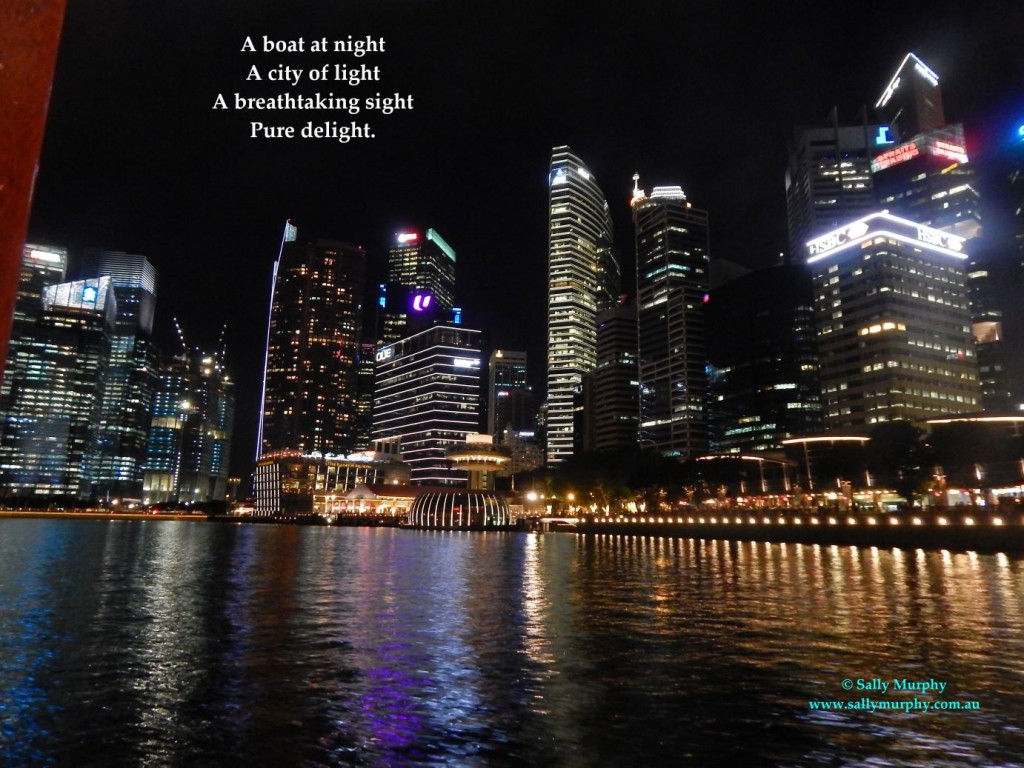 The Poetry Friday roundup this week is hosted by Elizabeth Steinglass.

It’s Poetry Friday and I’m still thinking about my visit to Singapore, and trying to create poems to go with some of my favourite pics. One of the animals I really wanted to see at the Singapore Zoo was the polar bear – and I wasn’t disappointed. He was absolutely beautiful. Here’s my photo poem.

Have a great Friday, and don’t forget you can see what my Poetry Friday friends are doing by visiting the Poetry Friday roundup, which this week is hosted by Trica at The Miss Rumphius Effect.

It’s Poetry Friday. This week I have been trying to restore some order into my workspace. This is an almost unending task because I am not a very tidy person, and my office space is limited to a corner of the loungeroom. One day, one day, I will have an office of my own (which will be sad, because it will mean less of my beautiful children are living at home),  but I do wonder if, even then, I’ll manage to keep my workspace organised. 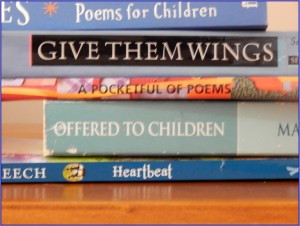 As I put the books away, I moved the verse novel, Heartbeat, to be with my many other verse novels, and immediately saw the beginnings of another poem. Some thought, some rearranging – yup, you’ve got the drill – and I had a second poem. 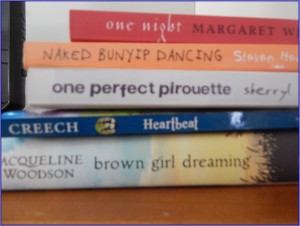 As I put these books away I realised that one of them was miscategorised too, since One Perfect Pirouette is not a verse novel, though it is by one of my favourite Australian verse novelists. I was tempted to put it away and see if that created a third opportunity, but then I realised I was in danger of spending the whole day making Book Spine Poetry and not getting the task at hand done.

Okay, back to work for me. If you’d like to see more great poetry and posts about poetry, head over to the Poetry Friday roundup, which this week is hosted at the amazing Poetry for Children blog.