I'm Sally Murphy, an Australian author of over 40 children's books. I'm also the slightly crazy mother of six beautiful kids. You'll find bits of me buried somewhere in every one of my books. I love reading, writing, and speaking about reading and writing.

View my books or hire me to speak at your school, festival, or writers group.

Another month has ended, which means another round up of what I have been reading. Also another month where my total was 12 books.  This brings me to 143, only 7 shy of my target of 150. I think I can do it! Here’s what I read in November:

Off to get reading, to ensure I reach that 150 by the end of the year. What have you been reading?

If you know anything about me, you probably know that I love poetry, and that I super really especially love verse novels.  SO it was really lovely yesterday to attend the launch of a wonderful new resource focussed on Australian verse novels.

The Australian Verse Novel Resource was put together by staff and volunteers of the National Centre for Australian Children’s Literature – and I was one of the volunteers, as was my friend and fellow verse novelist Kat Apel. Over the past two years our small group of four read every Australian verse novel ever published  for children or young adults (including many which were published during the project – they just kept coming!)  and we created a resource which doesn’t just list these books but offers a deep dive into them – including  a brief summary of each, listing of awards, links to  teacher’s notes, reviews and other resources, curriculum links and key topics covered.

Who is the resource for? YOU! It’s for:

Broken into two sections – one for novels for younger readers and one for older, you will find the resource here at this link.

Back to the launch – it was amazing to gather (albeit virtually) with other verse novelists, including Kat, Steven Herrick and Lorraine Marwood, and children’s literature enthusiasts, to hear Jackie French OAM speak so passionately about poetry and verse novels, and the difference they can make.

Jackie read from some of my favourite verse novels, including work by Steven Herrick, Pip Harry and Charmaine Papertalk Green. This to me is one my favourite things about verse novels – they are really are designed to be read aloud because, as Jackie says, one thing verse novels have in common is the way the voice speaks directly to the reader.

So, for my own little celebration of the launch, here is a video of me reading from Pearl Verses the World

Happy Poetry Friday! I’m off to check out the other poetry goodness around the blogosphere. Ruth will be hosting the roundup, so you can come along for the ride.

This week I’ve been thinking of failure. It’s one of my biggest fears – that I will start something and not finish, or, finish but not finish well.  Which I know is silly – because it’s more of a failure to not have a go than it is to start and learn from the experience. History shows lots and lots of failures that lead to learning and, ultimately, success.

Still, I can tell you about a lot of failures going right back to my childhood that I sometimes still carry with me. And it’s one of those that I’ve especially been thinking about.

When I was 7 my Mum very patiently taught me to ride a bike. I was a little young and uncoordinated to go from not being able to ride anything more than a tricycle to independently riding sans training wheels, but there was a reason – we were off to Rottnest Island for a family holiday. And, on Rottnest, the chief way to get around is by bike.

So Mum  taught me to ride up and down the laneway at home, and, when we got to Rottnest, a bike was hired for me, along with every other member of the family. I was still a novice rider – and had yet to experience the joy of hill climbing – or descents – and was not too  good at using the foot brakes which most bikes had back in the 1970s.

You might see where this is heading. All went well the first day or so, but then we rode to the top of the tallest hill on the island, probably to see the lighthouse which is there.  My memory is hazy on what we did on the hill, and I have no memory of riding up the hill. But what I do recall, very vividly, is riding down. A steep descent, picking up speed and  going from feeling excited to realising I was losing control. Time to apply the brakes. Nothing happened.  My family, behind me, calling out ‘brake, Sally, brake!’ But the brakes weren’t working and I was panicking.  It didn’t end well. Very soon I was in a bush at the side of the road, and my bike was on the ground.

I wasn’t terribly injured, but I was rapidly surrounded by my siblings and parents, who, once they realised I was okay alternated between laughter and asking ‘why didn’t you use the brakes?’

‘They wouldn’t work’ I sobbed.

It was fairly quickly established that the brakes were fine – but, in my panic I was pushing the pedals forward instead of back.

This failure might have been quickly forgotten but for two things – for the rest of the holiday I was banned from riding any distance, and had, instead, to ride in the baby seat on the back of  Mum’s bike. The humiliation! I was seven!  And then, not just for the rest of the holiday but the rest of my life, every time that holiday was mentioned, the story of me careening out of control down the hill to the cries of ‘brake, Sally, brake’ was told. And retold. With everyone laughing except me. When you are the butt of a funny story you don’t always see the humour – especially when it reminds you of a failure. (As an aside, it amazes me that my fall has been immortalised on yellow signs on the island)

BUT this story has a postscript. I have been coming to Rottnest a lot over the last few years. And, at first, I was very reluctant to hire a bike. Too many memories. But gradually I realised I was missing out on a lot. In February, for the first time, I finally hired a bike, and loved it.  And yesterday, back on Rottnest, I rode to the lighthouse – and successfully rode down it! And then I rode to the top of the second highest hill and rode down that too.

The smile I had coming down was as big as it would have been if I was till 7 – maybe bigger.

And, of course, I realised that some failures are temporary. Sometimes the next  day, the next week, the next month, other times 40 plus years later, another try gets a better result.

I’m going to try to remember that the next time I feel I’ve failed.

In the meantime, since it’s Poetry Friday, here’s a poem I wrote some time ago in celebration of bikes (and hills).

Going uphill on a bike

Each push of the pedals

Up out of the seat

Searching for the peak

Will it ever end?

Going downhill on a bike

The bottom comes too soon.

And, in case you think I came to Rottnest without snorkelling, here’s a little glimpse under the sea.

Poetry Friday today is hosted by  Carol. Pop over later and see what other poetry successes are being shared.

How did it get to be November already? Another month  has just whizzed past, which means it’s time to look at what I read in October.  Here goes:

What have you been reading?

It’s Poetry Friday which means it’s the day when bloggers from all over share poems and poetry fun. I started 2021 very keen to do this every week – and have not done very well at that goal. But today is the day to try to get back on  track.

One of the reasons I have been so busy this year is that, in the space just a few months, I was asked to create a resource for teachers to teach poetry, then wrote and compiled that resource and – voila – it was published.  A big rush to get there, but I am really happy that schools all over Australia have now got this book, and hopefully are finding new ways to share poetry in their classrooms.  If you haven’t yet admired the beautiful cover, here it is again: 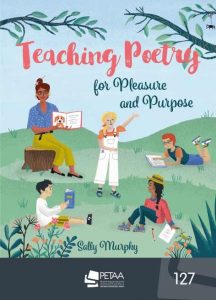 (You can find out more about this book, here at the PETAA website)

One of my goals for this book was to share a range of poetry forms which can be used in the classroom. Some of the forms are new but others are better known – with my own little twist.

One of those forms is the diamante – a commonly known form using seven lines (explained by Kenn Nesbitt here).  I started with the diamante, changed the rules and created Metamorphosis Poetry. Here’s an example:

Can you see why I called  it a metamorphosis poem? That’s right- because it follows the transformation (metamorphosis)  of a tadpole into a frog. It doesn’t follow the strict form of the diamante – which  specifies word classes for each line (nouns, then adjectives, then verbs and so on). Instead the pattern here is only around numbers of words – except for the first and final line, which move from juvenile to adult:

Line one: one word – the juvenile form

This could be replicated with other animals which metamorphose (caterpillar/butterfly; grub/beetle,; larva/salamander. BUT, you could equally move outside of the animal world  to write about  other transformations. Like this:

Other pairs that come to mind are story/book, bricks/house or tune/song – but I’m sure you can come up with others. I challenge you to have a go!

And, if you want to try another form,  Catherine, who is hosting this week’s Poetry Friday roundup  is sharing an amazing example of the Abecedarian. Go check it out!   Happy Poetry Friday!

Another month over and another round up of what I’ve been reading. Eleven books this month – which isn’t bad in yet another hectic month.  Also another month of quite eclectic reading – ranging from a childhood favourite to really serious nonfiction, which made me cry as I got face to face with some of Australia’s terrible history. But these are books that need to be read, and I will be reading more such offerings.  In the meantime, here’s the list:

Books for Children (and Grown ups too!)