Wow. What a reaction! Thank you so much to everyone who has joined with me here on my blog, on Facebook, Instagram, Twitter and, of course, in real life, to celebrate the release of Worse Things. I still hope to hold a ‘real’ launch at some point, but I have certainly  felt the love for my new book baby in its first few days out in the world.

Today I thought I’d share a little about the story behind the book, as I did with Pearl Verses the World, 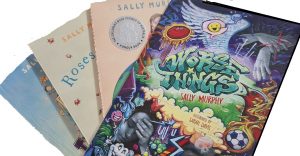 Toppling and Roses are Blue over the last few weeks.   When Roses are Blue was published, back in 2014, I had little idea it would take another six years before my next verse novel was published. In fact, I’d already started work on Worse Things by then.

When I started planning Worse Things I knew that I wanted to write something that stood apart from the first three. I wanted to challenge myself to do something a bit different.  One reason for this was the emotional toll writing on such serious topics took on me each time, but another reason as that I enrolled in a Doctoral program at university, and this verse novel was going to part of  my doctorate. So I wanted it to take me on a learning journey. And oh boy it did.

The topic of my doctoral thesis was Belonging – both as a theme within children’s poetry, as well as where poetry belonged.  As well as writing some chapters about these topics, I also decided to write a series of creative works – a collection of poems for young children, a second collection for middle primary aged children, and a verse novel, for middle grade readers. The collections would be linked by the theme of belonging.

So, I had a theme, which is not where I would usually start my story. But I also had an idea for a story I’d been toying with for quite a while: a sport story. I’ve always loved sport – in my younger days I played (not all at the same time): tennis, basketball, hockey, squash, netball, swimming and gymnastics as well as, at school, all kinds of sports including cross country running, athletics, teeball, softball, soccer, badminton and more.  These days I still swim, including competing in some open water swimming. My six kids, too, played a lot of sport, including most of those I’ve listed, as well as AFL (footy), rugby, cricket and volleyball. I’ve probably forgotten a few. The result of all this sporting love is that I have spent a lot of time either playing or watching sport – and that’s not to mention the professional sports I love watching.

One football season my youngest two sons had a really interesting time: one son broke his thumb (the same thumb!)  twice in the same season (and then again 18 months later) and the other dislocated his shoulder playing footy in the school playground.  As a result they both missed most of the season. But I was the team manager for one of their teams, and on the club committee, and then the boys took up umpiring, which they could still do while injured – and I spent just as much time on the sidelines that year as I would have if they’d played. Maybe more. And a lot of time at medical and physiotherapy appointments.

One night over dinner I randomly suggested I should write a footy story. I never write about my own kids but, on this  occasion, they reacted enthusiastically, and started chipping in ideas, mostly drawn from their own experiences. I very quickly realised that I couldn’t use most of these experiences – because they involved other people, especially the ones from their umpiring experiences.  I did not want to be sued by some of the parents involved! But I did know that both injury and umpiring could form part of a story.

It was only when I started my doctorate though, that I realised that sport and belonging had a lot in common because  team sports can really build a sense of being part of something. Conversely, they can also make you feel left out ( I have a really vivid memory of being about 8 and being part of a basketball team where I was left on the sideline for three quarters of the game because I wasn’t good enough. It was a parent on the sideline who told the coach, in my hearing, not to put me on the court!)

So, from these two things – football experiences, and the theme I’d chosen, that a story started to emerge. The choice to use multiple sports and voices grew from there, and from my desire to explore  different people’s experiences.

Initially, however, I only planned two characters – Blake, the footy boy – and Jolene the hockey girl. But I had this idea to experiment with point of view – I wanted to write one character using first person (I), and the other using third person ‘they’ – and then play around with second person, with one or both of them observing the other. This third voice very quickly became a character of his own, revealing himself as Amed, the soccer boy.  And although the first, second, third person idea ended up on the scrap heap early on, the exploration of three separate but overlapping stories is what developed into Worse Things. 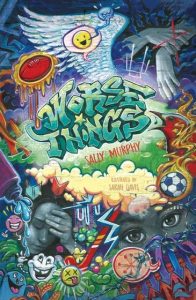