When I sat down to post today for Poetry Friday I had no idea what to write about. Then I looked out of office window and saw five magpies playing on the grass across the road, and the words of a poem by Judith Wright came to my head:

Along the road the magpies walk
with hands in pockets, left and right.

They tilt their heads, and stroll and talk.
In their well-fitted black and white.
( You can see the rest of the poem at AllPoetry )

I’ve blogged before about different poems that make me tingle – that make me smile, or cry or shiver, and that stay with me for years and years. This is one of them. What a perfect extended metaphor, and about a bird I love. I hope you love it as much as I do.

Poetry Friday is hosted today at Merely Day by Day, where you can find links to all the poetry goodness.

Welcome to Poetry Friday. I’m really enjoying being part of this poetry celebration, connecting with poets and poetry lovers from around the world. I hope you’re enjoying it, too!

February is looking to be a busy month for me. Who am I kidding?  With six kids, doctoral studies and a writing career, every month is a busy month. But February marks the release of my newest novel, 1915, and the busyness of celebrating and promoting means an extra level of busy. (By the way, if you’d like to join in the celebrations, you can leave a comment on the virtual launch below, and go in the draw to win a copy of the book.)

Another thing keeping me busy this month is a poetry challenge. I’ve blogged before about how participating in a writing challenge can be both fun and productive. When I heard about the Post it note Poetry Challenge, I had to give it a go.

The rules of the challenge are simple. Every day in February – or on as many days as you are able – you write a poem on a Post It Note (any size, any colour), take a photo and tweet it with the hashtag #postitnotepoetry. The poem can be any form and on any subject, the only limitation is in keeping it short enough to fit on the post it note.

Here’s one of my efforts: 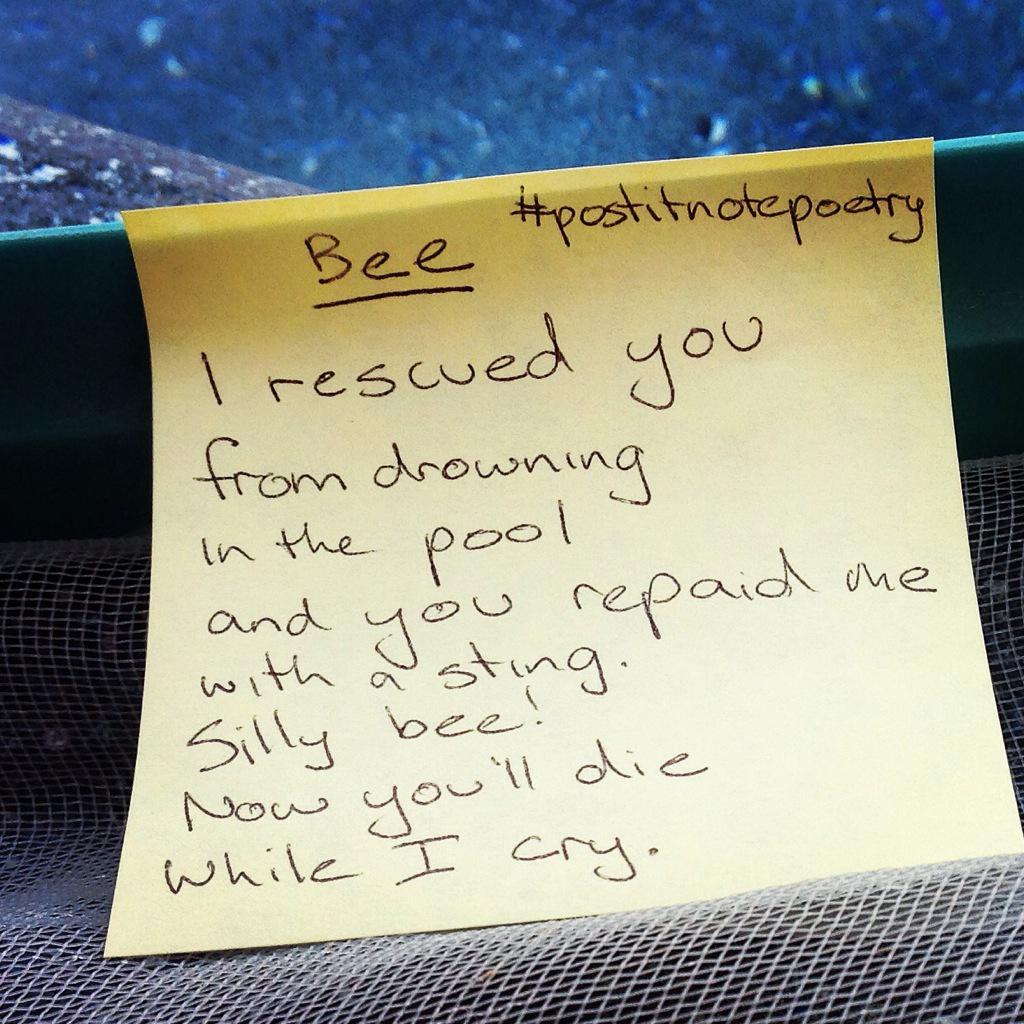 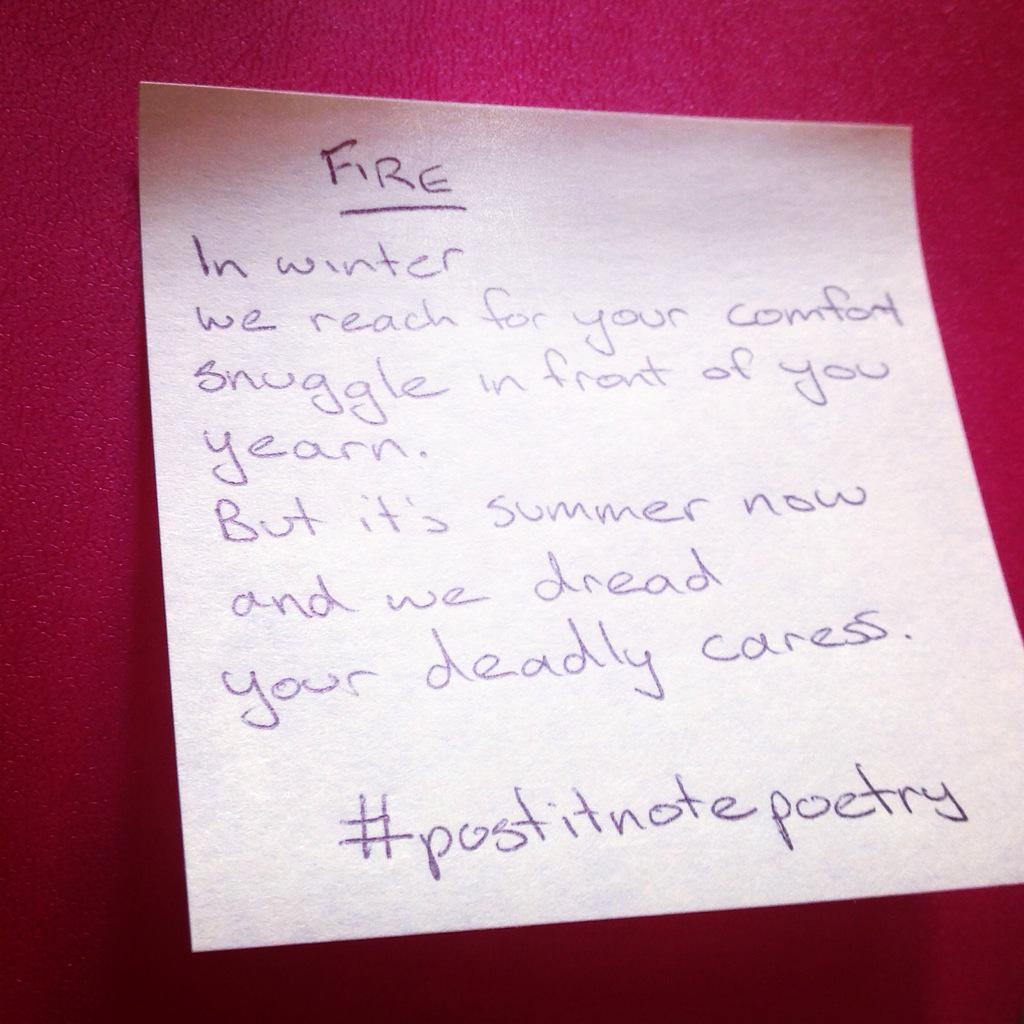 It’s not too late to join in with your own poems. The confines of space but can be a good way of condensing your thoughts, and the temporary nature of a post it note means you can use the exercise to draft something that you might rework later.

Poetry Friday today is being hosted by Elizabeth.  You can see a round up of all the wonder that is Poetry Friday at her blog.

See you next week!

It’s Poetry Friday – hooray! I’m having a busy week, the last one before school goes back here in my part of the world, but I didn’t want to let a Friday go by without sharing a poem that always makes me smile.

And the earth is painted green,

With such a lot of nice fresh air

All sandwiched in between

Have a great Friday. Poetry Friday this week is being hosted by  These4corners.   Head there to see a round up of all the poetry-goodness that is Poetry Friday.

I went for a walk last week, and was reflecting on how wonderful exercise is for prompting new writing ideas, or for solving an issue. And right on cue, my brain starting working out how to put what I was thinking about into poetry.

At home, I wrote down those first few lines, and left the paper on my kitchen bench. Later, another stanza came, and later still, a third. I love the way that the barn works like this sometimes. And the poem? Here it is:

or, perhaps, he’s walking me

but in my head, while my legs pace,

but as I soap and warble

when at my desk I sit

but often times I simply scribe

the words my head has writ.

Do you have a favourite non-writing activity that leaves you inspired to write?

Have a great Friday – and if you’d like to see more posts about poetry, pop over to A Teaching Life and  check out the Poetry Friday round-up.

It’s Poetry Friday, and this week I want to talk about a poem I love, in a book I love, even though I only read it for the first time this week.

Perhaps the book first. I bought Brown Girl Dreaming as a gift for myself for Christmas, because I’d heard so many wonderful things about it. Since Christmas I’ve been busy and hadn’t got around to reading it until Myra at Gathering Books shared her responses last Friday, which reminded me to make time to read it for myself – and boy am I glad I did.

Brown Girl Dreaming, by Jacqueline Woodson is an autobiographical verse

novel. Woodson allows us to grow up with her, sharing the story of her childhood and what it was like growing up as an African American child in the 1960s.  Through the eyes of a child we see the civil rights movement,  feelings of difference and a search for identity – as well as good times with family and friends. As an Australian reader  I learnt a lot about the time period, and about Woodson’s life, but I also felt that this was not just a book about the United States, or about that particular time period. By connecting with Woodson’s story we also have the opportunity to connect with the experiences of people the world over. It is a universal story just as much as it is a very poignant personal one.

Onto the poem. As well as the themes and subjects I’ve mentioned above, Brown Girl Dreaming also traces Woodson’s early development as a writer – from being given a composition book before she could write, to the joy of being able to write her own name, to her early attempts to write poems and stories. From a young age, she knew she wanted to be writer. My favourite poem of the book, I think (though I bookmarked a dozen) is called ‘When I tell My Family’, and tells of how Woodson’s family react when she tells them she wants to be a writer:

It’s a good hobby, we see how quiet it keeps you.

But maybe you should be a teacher,

I’ll think about it, I say.

And maybe all of us know

this is just another one of my

I love the way Woodson shares this moment (I suspect there were many of these moments) through the eyes of her child self. She doesn’t editorialise or tell us that the adults were wrong. She doesn’t say that she was hurt or angry by the adult responses.

Like Woodson, I knew  from a young age that I wanted to be a writer, and  I had moments like these, too. When I read this poem, I marvelled at how Woodson manages to show us her response so eloquently in those last three lines.

If you haven’t read Brown Girl Dreaming, you are missing out on a beautiful verse novel.

Want more poetry? This week’s Poetry Friday roundup is at Live Your Poem.

It’s Poetry Friday, and this week I’d like to tell you about the poetry game I play with my friend Rebecca Newman, called Poetry Tag. The game, which was Rebecca’s idea, involves each of us taking turns providing the other with a set of words which must then be included in a poem and posted on the Poetry Tag blog.

We’ve been playing tag for just over a year and it’s a lot of fun – though both of us have had times where the set of words we’ve been given has caused consternation. But we always come through, and along the way we’ve stretched ourselves in surprising ways.

The most recent set of words Rebecca set for me were: supper, my and virtue

It took me a while to come up with a poem I’m happy with, but here’s the opening lines of The Last Supper:

At that last supper
the men ate and drank
and hung on your every word
Little knowing it would be
their last meal together –
even when you, my heart,
told them one would soon betray you,
one deny.

(You can read the rest of the poem here).

A poetry challenge is a great way of stretching your poetic muscles. I would never have written a poem on this topic if Rebecca hadn’t chosen those words. What writing challenges do you set for yourself or others?

Looking for more poetry? The Poetry Friday roundup is at Tabatha Yeatts’ Blog.