I’ve been reading and thinking about verse novels lately, and the way that lots of smaller poems can weave a narrative. So, for Poetry Friday today I thought I would share the opening poem from my own verse novel, Pearl Verses the World. 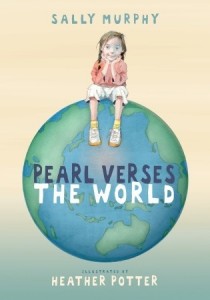 That I am on an island –

With just a single coconut tree.

Other days I think

I’m trapped in a bubble

Floating aimlessly through a void.

No one sees me.

This poem came to me late one night as I was getting into bed. I grabbed a piece of paper and jotted it down. It was only later that I realised that this wasn’t only a stand-alone poem – it was the start of a story, a story which insisted on being told.  And so it evolved into a verse novel.

At the start of this book trailer (which was my first ever attempt at such a thing) you can hear the poem read aloud, by Murphlet 6.

Ever since that poem came to me, I’ve been really grateful that it chose me – and that Pearl, the voice in the poem, chose me to tell her story. The book has been published in Australia, the United States and England (under the title Pearl) and was made into a play by the Jigsaw Theatre Company. Most importantly, it’s been read and loved by children and by adults, some of whom didn’t even realise that the book was poetry – which is fine by me (I call it poetry by stealth).

What was the last verse novel you read? If you’ve never read one, maybe it’s time you tried one for yourself.

Happy Poetry Friday. Today’s roundup is hosted by Beyond Literacy.