I had an email from a teacher named Hillary  who asked the following: Just purchased ‘Do Not Forget Australia‘ to read to my yr 2/3 class . I was hoping to pick your brains about the best way to help the children relate to the story.  Their world view is not broad so I am searching for ways to help them identify with the story.  Any ideas? 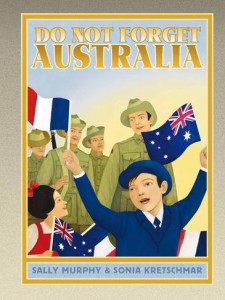 I sat down to reply to the email then decided that  there was so much I could say, and with ANZAC Day approaching, I might instead answer it here on the blog. Do Not Forget Australia is historical fiction set in 1918 and explaining the events at Villers-Bretonneux on April 25, 1918 and the subsequent rebuilding of the local school with funds raised by Australian children. The book is suitable for reads from primary school age through to adult but, as Hillary points out, some children will need extra help to understand the story.

So, here are some ideas, all of which I’ve used.

I hope these ideas help Hillary and any other teacher or librarian who wants to share Do Not Forget Australia in the lead up to ANZAC Day. There are also teacher’s notes for the book available here.

If you have any questions for me about teaching my books, or about writing and publishing, or about things that happen in my books, why not drop me a line?