I am really excited to be welcoming today’s guest blogger – because Rebecca Newman is a fellow West Aussie. So, please make welcome Rebecca, here to share what it is she likes about chidlren’s poetry and to join in the celebrations for the release of Toppling.  Over to you, Rebecca.

The Magic of Children’s Poetry 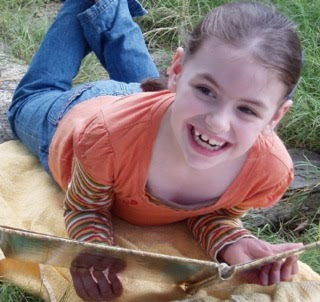 I am excited to be here to celebrate the launch of Toppling, and I would like to share a story about children and poetry.

Last year I was asked to start a Writers Club for five 6 year olds who were prolific story-writers. The teacher thought they might enjoy getting together once a week, so they could share their stories with each other and talk about books, how to improve their writing, and … well … write more stories.
They were enthusiastic writers, but as the end of term approached, everyone was quite tired. I thought it might be a good idea to change tack for the last few weeks, and so I brought along a book of Michael Rosen’s poetry (which my own children love). I couldn’t say our five budding writers were thrilled when I announced that we would be reading poems, but they sat down ready to listen.

I had chosen his poem ‘Why’, and it’s a bit like a mini play—so I suggested they could do the little boy’s repeated ‘why’s. We practised that a bit and then we read the poem all the way through. While we were reading it, it was clear that they weren’t getting into it.

When we finished, there was silence. They stared at me.

Then one boy gave a surprised laugh, and leapt up like someone had pinched him. All five suddenly fell on me, stole the book, and went off to huddle on the other side of the room—where they took it in turns to be the adult in the poem. Each time, they flung their heads back and cackled. Then someone else would have a turn.

They had forgotten I was even there.

At the end of the session, they called out the lines to ‘Why,’ all the way back to the classroom. And they were still cackling.

That night I said to my mum, Michael Rosen has magical powers.

They began to write poems. And they were fabulous poems, too. I would not be at all surprised if they published their own books of poetry—and a verse novel or two—some day.

Rebecca Newman is the Publisher and Editor of children’s literary magazine, Alphabet Soup. She lives in Perth, WA, and she and her husband are raising three poets of their own. (Rebecca also updates the magazine’s blog http://soupblog.wordpress.com/)

Thanks so much for sharing your story Rebecca. Sounds like YOU have magical powers, too, to have inspired the children so well.