A sneak peak of the cover for Roses are Blue: 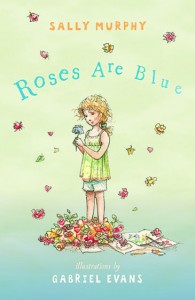 It’s due for release on July 1, though it will be launched a little earlier, at the CBCA Conference in Canberra in May.

It’s a lovely time of year in my part of the world. Autumn seems to be always mild here, and this year it’s been glorious (though I am aware that we really do need some rain). As a result my morning walks and bike rides are special, filled with bits of magic.

Most magic this week has been the presence of three pelicans on my local lake. It’s not a big lake, but always has plenty of ducks, an occasional swan, ibises, and even spoonbills. But I’ve never seen a pelican there – let alone three of them.

When I first saw them I took a bajillion photos, worried it might be a one off. This is one of those photos, taken last Thursday: 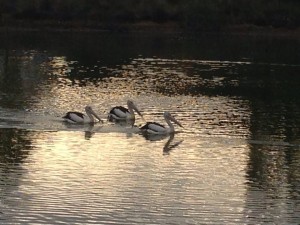 The light that morning added to the magic.

Nearly a week later the pelicans are still there, but the magic hasn’t worn off. I did think, though, that I was all photoed out – until I stood on a bridge, watching them through the railing – and knew I had to snap this: 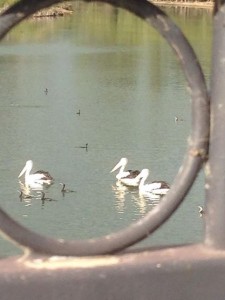 Reminded me more than a little of looking through the round window on Playschool.

A day that starts with a pelican (or three) is bound to be a good day.

Frogs frogs frogs. So many frogs in an unexpected place:

Okay, so maybe frogs in reeds is not unexpected. What is unexpected is that these reeds are next to a bridge on a busy road. You can’t see them unless someone tells you they’re there because you have to stand on a retaining wall and peer over  the bridge railings to see them – hundreds of frogs colonising reeds at the edge of a little lake.

I like to think they are secret frogs, there just for my enjoyment, after Murphlet 2 discovered them and told me about them.

The theme for this week’s 52-week Illustration Challenge is trees. I found this one a little easier than last week, but took a while to figure out how to present it. Hope you like the finished product.

The theme for this week’s 52-week Illustration Challenge is cross-hatching.  I really struggled with this because, while this is supposed to be an illustration challenge, I’m participating by writing a poem on each week’s topic – a picture in words, if you will. But cross-hatching is a specific illustrative technique, and hence not so easy to write a poem about. I did have some ideas along the line of overlaying the words so they were cross-hatched, but struggled with how  to do this.

Anyway, after lots of false starts I came up with a pretty rough little rhyme about cross-hatching. Here it is:

Cos I don’t know what to do.

My head and I’m feeling blue.

Cos it’s really hard to write.

There. A poem about cross-hatching. But then, a little miracle happened.

I attended a session at the Perth Writer’s Festival on Sunday where awesome young illustrator Gabriel Evans (who just happens to be the illustrator for my forthcoming verse novel, Roses are Blue) was presenting . Anyway, Gabriel drew a snail on the whiteboard and commented that snails could have lots of different patterns on  their shells – stripes, spots, squiggles. and so on. Suddenly, a little voice in my head said ‘cross-hatching!’

So, back at home, I had a go at drawing a snail, trying to remember how Gabriel did it. When that failed, I found an online tutorial for how to draw a snail: here. It took a few goes, but I drew a recognisable snail. Then for the cross-hatching. I had thought I would just cross hatch part of the shell – which is kind of the point of cross-hatching – to create shadow and contrast.  But I found that it didn’t really work that way, plus cross-hatching is fun – so I did the whole shell. And, for the shadow effect, decided more cross-hatching was needed.

So, from someone who doesn’t draw, here is my attempt at cross-hatching: 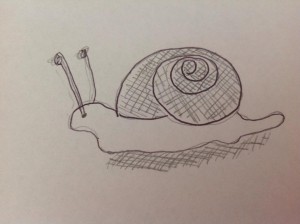 Not planning on giving up my day-job any time soon, but am a bit proud of myself for trying something new.

View from my bike this morning when I stopped for a breather:

So blessed to live in such a  beautiful part of the world.