I have just had four of the busiest weeks of my life. In those four weeks I visited schools and libraries in Perth and around the South West, as well as flying to Gunnedah in New South Wales, and presented over 50 sessions talking about myself and my books. By the end of it I have to admit I was pretty tired. Very tired. Achingly tired. So tired that when I ran into a local friend last week she commented on how tired I look and told me I should just take a day off. I smiled, said I would do so, then the next day got in my car and drove to Mundaring for another session (you can see a photo from that session below).
This week I have a week free of  speaking commitments, and I have time to get some writing done – as well as more mundane things like housework, paying bills and so on. And I also have time to reflect on the past four weeks. Sure, they were really busy and more than once I wondered if I could really meet all my commitments. But meet them I did, and I had an absolute ball.
But, in honour of the friend who suggested I needed a day off, and anyone else who is wondering, I thought I might explain WHY I do school and library visits.
1.      1.  It’s fun and inspirational. Standing in front of a room of kids and talking about myself and my books is so unlike work that I sometimes forget it IS work. For 45 minutes I talk, read, smile and, importantly listen, as I share with kids my stories, and my life as a writer. It’s an absolute blast.
2.      2.  It promotes my books. Getting published is hard, but getting the word out about your books can be even harder.
3.       3. It pays well. Very few children’s authors can make a living from writing. Speaking engagements  pay well and allow us to continue writing.
4.    4.     It engages me with people. Writing can be a pretty solitary occupation, with most of my work taking place at home on my own. When I go out to schools and libraries I am socialising, meeting people and connecting with them.
5.     5.   It helps kids. I  have left this one to last because it is the most important. Meeting a ‘real’ author can be really engaging for readers of all abilities. Often a reluctant reader will be inspired to read, and an avid reader will feel validated. Kids are also inspired to write after listening to an author.
There are other reasons, but these are the key ones, and, whilst the busyness of four weeks of author visits is tiring, it also leaves me feeling energised, ready to write more and speak more, too.  I look forward to speaking more, and am delighted that the bookings for next year have started to come in. If you’d like to book me to visit your school or library, you can contact me through my website. 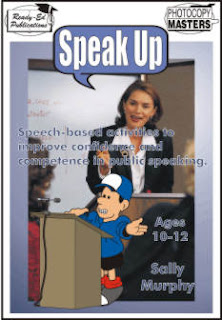 More sample pages, this time from Speak Up, the sequel to Speak Out. I’ve always been pretty proud of these two books as they really encourage kids to speak more confidently (and competently) in a range of situations.

An Article First Published in Buzzwords Magazine in 2007

Preaching to the Not-Necessarily Converted

Most children’s authors know the importance of self-promotion, and most are equally aware of the value of speaking engagements as a self-promotion tool. Most of these engagements involve speaking to the converted: those who have a ready interest in children’s books, including children (at school visits), teachers and librarians (at conferences and professional development) and other writers (at festivals and workshops). But what about speaking to those who are not necessarily converted?

As well as the above mentioned groups, there are numerous opportunities for speaking engagements which may pay off in the form of book sales. Social groups, special interest groups, community groups, and non writing-related conferences all have a need to find guest speakers. The key is to make the most of these opportunities to increase awareness of you and your books. However, you also must make your speech relevant, interesting and entertaining for your audience.

In the past month I have been had three such speaking engagements, each very different from the other.

In the first instance, I spoke to a group of parents and grandparents about the considerations of choosing books for children. Although there were a couple of writers in the audience, most were simply people who wanted tips for choosing great books to share with their children. I discussed aspects including subjects, formats, prices and even the best places to source quality children’s books, and gave examples of good books.

In the second instance, I spoke to a local craft group at their monthly meeting. There were a couple of women present who were interested in writing, but the majority weren’t. My focus here was on me as a person. These were people from my town and so many knew me, or had seen me around – but I was familiar to them as a mother, wife and local teacher. Some didn’t know I was an author, whilst others knew just a little about that part of my life. So my speech focussed on why I write, how I came to be a published author, my books, and, more generally, the importance of following your dreams.

Thirdly, I spoke at a Rotary Club changeover luncheon. This is an important event in a Rotary Club’s annual calendar and sees the handing over from the outgoing president and committee to the new one. I was asked to be the after lunch guest speaker, and given free reign on my topic. This one was harder to narrow down. The audience would be varied in background and interest, probably equally male and female and many with not a lot of interest in children’s books.

In this instance I spent a lot of time trying to decide on my focus, but just the day before I was to speak I had a little flash of inspiration. I decided to use some of my books as a framework for my speech to show how my children’s books – featuring frogs and dogs and teddy bears – were really just thinly disguised stories of my life. It was, in essence a speech about myself – but with a dash of humour, some public soul-searching and the opportunity to read from my books to a group I wouldn’t ordinarily read to.

How did these opportunities come about? Two out of three (the second and third speeches) came from direct contact. I was approached by people who knew me – grandmother of one of my students is the president of the craft group, and a work colleague is the new Rotary Club president. The talk about choosing books came about through someone finding me online and emailing me.

In the past I’ve had speaking engagements come from direct approach at festivals, search engines (people looking for children’s book authors, for example) and word of mouth – friends of friends. I was once rung out of the blue by a lady whose daughter went to school with me. From this I was booked for two paying speaking engagements – one at a literary lunch and the other reading my books at a local agricultural show.

So how do you make the most of these opportunities? Here are a few dos and don’ts.

Do: 1. Take chances. Accept invitations and have a go. You might surprise yourself.
2. Take your books with you, even if you’re not talking about them. If possible, set up a display so that people can see them. Then they’ll know what to look for in bookstores.
3. Ask the organiser if it is appropriate for you to sell your books. In some instances this will be possible, in others it isn’t appropriate. I didn’t sell books at the Rotary lunch, for example, because it didn’t seem the right place – but a question from the floor asked where my books were available, and I was ready with an answer.
4. Tailor your speech to your audience. The talk you give to primary school students probably won’t be quite right for a group of retirees.

Don’t:1. Present your speech as a sales pitch. You don’t convince people to buy your book by asking them to do so. If they engage with you as a person, or enjoy hearing an extract from your book, they are likely to seek out your book. When I spoke about choosing children’s books, I didn’t plug my own books – but the people there knew that I also wrote books. That was enough.
2. Be afraid to accept or even ask for payment. You will need to decide if you are going to demand payment, but then stick to your decision. In my own case, my criteria is simple – if someone is making money out of it (now or in the future), then I will too. The craft group, for example, were not making money and were not learning from me in the same way as if I ran a workshop, so I didn’t charge. If they asked me to present a writing workshop, I would charge – and expect them to charge participants.
3. Forget that everyone knows a child or knows somebody else with a child. The little old man in the front row might have a tribe of grandchildren. The twenty-something girl near the door might well be an aunty, or a babysitter.
4. Expect all the sales to happen on the day. The people who hear you might remember your book when they’re looking for a Christmas present in six months time. Or they might not buy your book, but they might tell a friend or relative about your work.

I love getting out and speaking to a wide range of people. I also love increasing the sales of my books. If you, too, have the gift of the gab, use it to your advantage to get the word out about your work.