Another month has past, and time again to look at what I’ve read this month. Lots and lots. I knew I was reading a lot – but was surprised to realise I’d got through 22 books this month. My favourite?  Bren MacDibble’s How to Bee.

As always, I’ve linked to my reviews where I’ve reviewed them.

Trouble and the New Kid, by Cate Whittle, illustrated by Stephen Michael King

How to Bee, by Bren MacDibble

Jinny & Cooper: Revenge of the Stone Witch, by Tania Ingram

Tarin of the Mammoths, by Jo Sandhu

Mr Romanov’s Garden in the Sky, by Robert Newton

This is My Song, by Richard Yaxley

The Mother’s Promise, by Sally Hepworth

Police at the Station and They Don’t Look Friendly, by Adrian McKinty

Daughter of Mine, by Fiona Lowe

From the Wreck, by Jane Rawson

In the Line of Fire, by Ian Townsend

Have a great July! Would love to hear what you think about any of these books.

This year I am hoping to keep track of my reading with a monthly round up of what I’ve read. I’m only to count picture books if it’s the first time I’ve read them, and I’ve reviewed them. As I read poetry every day, but tend to dip and out of books, I’ll only record collections/anthologies which I have read cover to cover.

Anyway, as January draws to a close, here’s what I’ve read, grouped by age range or format. Where I’ve reviewed the book, I am linking the title to the review, which means you’ll get a bit of a blurb direct from the review. .

When the Lyrebird Calls, by Kim Kane

Star of Deltora: The Hungry Isle, by Emily Rodda

Within These Walls, by Robyn Bavati

The Museum of Modern Love, by Heather Rose

The Fence, by Meredith Jaffe

The Safest Place in London, by Maggie Joel

The Love of a Bad Man, by Laura Elizabeth Woollett

That’s it for January – fifteen books. What have you been reading? I’d love to hear your recommendations.

Over on the Aussiereviews blog, I have just posted a list of five of my favourite childhood books. You can see it here.

I’d love to hear about your own favourite books.

It’s Day 19 and time to get your book further afield. Today’s task aims to spread the word in a new space. Ready? 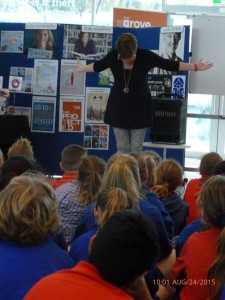 Spreading the word far and wide.

Email another blogger (ie a blogger another than yourself) and ask them to interview you or otherwise host you on their blog.  This can be confronting, but is a great way not just to spread the word about your book but also to make a friend, especially if you reciprocate by inviting them to visit your blog, either now or later.

Can’t find a blog to visit? I’m going to make it super easy-peasy for you. If you are Australian, visit my other website Aussiereviews.com and then email me through the site and ask if I can host you for the Meet My Book feature. Unless I am swamped by hundreds of requests, I will be happy to send you the questions and schedule your post very soon. How easy is that?

A word of warning: whether it’s my blog or someone else’s, always visit the site before you email, and show that you know your book is a good match for what they do. And be polite. Most bloggers are unpaid and do what they do in their spare time, so showing respect makes their task much more enjoyable.

The clock is ticking: five minutes is all it will take. Go!

Another month has passed, and so it’s time to have a look at what I read for February. Pleasing to see my balance being restored towards my chief love – books for children. This month I indulged my six year old self and tracked down old copies of AA Milne’s poetry from Ebay. I loved rediscovering them and have moved from there to lots of other verse and poetry, so look out for them in my March list and beyond.

I only read 12 books, and several of them were short, which is a reflection of how busy my life has been of late. I’m a so reading a lot of journal articles which don’t make it into this list.

Those I’ve reviewed I’ve linked to, as always.

I’m having a busy week (who am I kidding? Every week is a busy week) but just wanted to share a couple of exciting happenings.

Firstly, on Sunday the new-look Aussiereviews went live. I’ve been running the site for over ten years, focusing on reviewing Australian books, and the site was well overdue for an overhaul. My lovely daughter did the new design, and I spent quite a bit of time transferring over 2300 reviews from the old html individual files over to a much easier content management system. Check out the new look here and read a little more about the overhaul here.
In other exciting news, Monday brought me that thin that makes every author’s heart sing – an advance copy of my newest book-baby.  Check out the beautiful cover! Sonia Kretschmar‘s illustrations are simply stunning.
Do Not Forget Australia will be released by Walker Books on March 1, but if you simply can’t wait, you can preorder your copy here.
Hope your week is just as funfilled and exciting as mine is proving to be!