Before this year I’d only ever seen whales twice. This year, it seems whales have been a bit of a thing for me:  a whale watching oat trip with two of my sisters a few months back, then seeing whales from the plane when I flew to the Abrolhos Islands on my trip to Geraldton last month, then spotting whales from Smiths’ Beach a few weeks ago, and seeing two bobbing in the surf off our local Back Beach last week. Today, however, was the ultimate whale experience.  Excited by our trip off Augusta as the whales headed north earlier in the year, my sisters and I decided we would head to Busselton to see if we could see them again on their way back south. My mum decided she’d like to come along, too.

The cruise was due to go for two hours, and we saw whales not too long after leaving the marina. We also saw a pod of bottlenose dolphins, and lots of flying fish, which are the coolest – and oddest – of all fish. The whales, though, were hardish to spot and mostly quite a a long way from the boat.

Until, that is, we were heading back to the marina, when we were lucky enough to come across a group of six or eight whales jumping, splashing, whooshing and putting on an awesome display.

Of course, I had my camera ready, and of course the photos don’t live up to my excitement of seeing whales breaching over and over again. But, here is evidence that they did indeed breach: 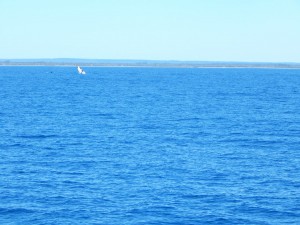 And, a couple that show just how close they got: 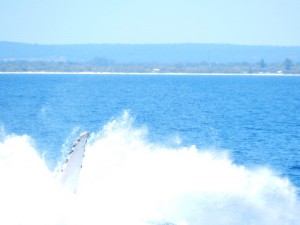 (I think if my hand, and the boat, were more steady, this would have been an amazing photo. Instead you have a fin and the massive splash that a 40 tonne whale makes when it lands). 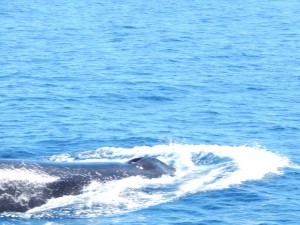 The best photos of all are the ones I didn’t get with my camera – because I had to put the camera down and just watch and exclaim and clap and sigh and exclaim some more. So those images are in my mind, but it was a day that will stay with me for a long time, and I suspect there will be some whales in my writing in the near future.