One of the questions I’ most commonly asked when I do author visits is ‘How long does it take to write a book? ‘ It’s kind of like the old ‘how long is a piece of string?’ because each book is so different. And of course, when do I consider a book written? Is it when I finish the first draft? The second? The twentieth?  When I finally submit it to a publisher?
Often when I’m asked this question I answer with how long it took from first idea to publication, and audiences are usually surprised with the length of time – both Do Not Forget Australia  and Head Hog were over five years in the making, from idea to publication. Pearl Verses the World was pretty quick (possibly the quickest ), being only about a year.  Next time I’m asked this question, however, I may well enter the realms of disbelief – because today I’m holding in my hands a copy of a book which was 17 years in the making, from idea to publication.
Brace Yourself, newly released by Blake Education, is one of the first children’s novels I tried to write. The idea came to me almost 17 years ago, inspired by two events in my life. Firstly, I moved town to the lovely Donnybrook, and  watched my oldest son trying to adjust to life in a new town. Then, we went house hunting. Our budget was tiny and there were only three houses in the town that were in our price range.  The agent wanted to only show us two of them, but the third was one I drove past every day and was fascinated by. It was old and run down, but something about it called to me. I insisted she show it to us. She was right – we should not (and did not) buy that house: it was a mess. There were holes in the walls and floors, the plumbing and wiring were shot and the kitchen was unusable. We could afford to buy the house – but we couldn’t afford the money to make it habitable.
We didn’t buy it – we bought a little house just up the street, where we were very happy. But that house, that falling apart house, stayed with me. I loved its pressed tinned ceilings, its big rooms and its front veranda. Most of all I loved its character.  That house spoke to me – and sparked a story. What if you were a kid, a bit like my son, dragged to live in a new town – and when you got there, you had to live in that house?
I wrote that story and I rewrote that story and I rewrote that story. And I submitted it to publishers – and it was rejected. So I rewrote it. I ran it by critique partners. And I submitted it again. It was a hard story to place – partly because of its length – and it had many different versions, including an attempt to rewrite it as a verse novel, which wasn’t very successful. The story changed quite a bit – the character was not my son any more, the town was not Donnybrook, but one thing was constant – that house was always the same house.
I almost gave up on the story several times. It spent long periods of time in a bottom drawer. But I kept going back to it, kept believing in it. Then a couple of years ago I saw a call from Blake Publishing for books for a series – and knew Brace Yourself fitted the bill. I dusted it off, reworked it a little and sent it in.  And boy am I glad I did. Because eventually the story was accepted, and today I held my advance copy in my hands for the first time – seventeen years after I was inspired to write it.
So, how long does it take to write a book? As long as it takes. How long to get it published? As long as it takes. In this case: 17 years. 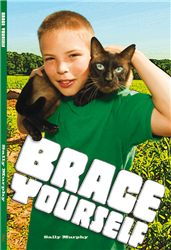 Brace Yourself is available now from Blake.