Today’s guest blog is by Aussie author, Hazel Edwards, who drops in to talk about the collaborative rpocess behind her new novel f2m: the boy within, cowritten with debut NZ author Ryan Kennedy. Thanks for dropping in Hazel. Over to you.

F2m: the boy within: Collaborating on ‘Edgy’ YA Fiction about Transitioning Gender
by Hazel Edwards 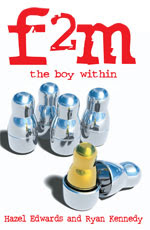 Although I’ve been collaborating online via Skype weekly novel plotting for 18 months (and 40 drafts) with Ryan Kennedy my co-author of the YA novel f2m: the boy within, writing a guest blog is a new challenge for me. Thanks for the invitation Sally.

Co-writing fiction about transitioning gender and punk music, when you’re crossing countries (Australia and New Zealand), generations and cultures (music and gender) is like going on an expedition into the world of new ideas. Ryan has been a great co-author, and an interpreter for me. Not quite like an Antarctic expedition, but, cool!

On Feb 1st, our novel f2m: the boy within is released by Ford Street Publishing, and that’s pretty exciting because it’s the first international YA novel about transitioning from female to male. It’s Ryan’s first novel. I’ve written quite a few others, (including Antarctica’s Frozen Chosen’, from the perspective of a 21 year old male scientist) Ok, I’m not male and I’m not 21. But writing believably from the perspective of a character unlike yourself, is the greatest challenge for an author.
Ok. Here are the facts.
We’ve known each other as family friends since Ryan was an 11 year old girl. He’s now a man in his early thirties. New Zealand-based Ryan lived as female until his transition to male at twenty seven.

Ryan works in IT and is a passionate environmentalist and musician. Check his website (below)

NOT autobiographical, but co-writer Ryan has experienced the medical sequence of gender reassignment.

f2m is also our title for creative collaboration via Skype plotting.

In f2m: the boy within, the central character is an 18 year old, a crucial age for ID and also a ‘coming of age’ period when vital decisions are made about work, friends and lifestyle, especially if there is a difference between the person inside and the outside.

Character Skye plays guitar in all female Chronic Cramps punk band but now she’s presenting as a male called Finn. Her family find it difficult to accept losing a daughter but love their teenager.

That’s why our metallic cover with the Russian dolls within dolls was so carefully chosen. And our title of f2m, rather than ftm, the medical term for female to male, indicates our process of collaborating on the writing of this novel.

Because our process of collaboration has been equally fascinating as the content.

People always ask, how do you manage to co-write? And especially fiction! And on such a taboo subject.

If you write about a controversial subject, the tone must be appropriate and the language was the first challenge. I had to learn a new vocab. Both for punk music and for transitioning.

Working together, the pronouns were the first challenge for me. It’s so hard to start saying ‘he’ when you are used to saying ‘she’ or ‘her’. My compromise was to use the name more, rather than the pronoun. Now, I have no problem with ‘he’ and ‘his’ and I think of my co-writer as a thoughtful male with keen observation skills from ‘reading’ others in gender roles.

A brief but candid W.I.P. ( work in progress) log was my way of keeping track of medical, literary and technical challenges before we forgot the details of genes, dates, sexist terms, fake family history trees , electronic glitches and the embarrassing moments!. As Ryan is NZ based we worked electronically, with him e-mailing me a raw, first draft chapter weekly, usually on a Sunday night. Then I would work on this version, before returning it to him later in the week. We used tracking, but also colour coding for bits which needed later fixing. In the last month, we were Skype-editing and exchanging daily on the 70,000 word draft.
f2m is fiction, based on genetic fact
Character Skye plays guitar in all female Chronic Cramps punk band but now she’s presenting as a male called Finn. Her family find it difficult .Him or her? Getting the pronouns right is hard for friends and family. Then there’s photo ID, which toilets or changing rooms and all the legal stuff. And is Great Uncle Al also Alberta?Finn gets online help and counsellor Greer even helps Finn sing ftm lyrics on the TV Current Affairs program.

By tracking only on the constantly updated master, then Skyping the ms for the co-writer to add, no updated work was lost. A co-author in another time zone, means you are fresh at different times. Despite this we realised that the birthday cake would be stale before Dad’s 50th party, since extra chapters had intervened since the cooking. Finn suffered fatigue from injections not yet given and we had to monitor who acknowledged Finn’s male name. Getting the medical details & terminology right required lots of checking.

Yes, this ftm ( female to male ) transitioning fiction is a first for a YA novel. There are other novels like ‘Luna’(great book!) which is about mtf.(male to female) transition.

And it has been a satisfying and significant book to write, because it is needed to provide a compassionate and funny perspective on a taboo subject.

f2m:the boy within
http://www.fordstreetpublishing.com/ (can order from here or Pan Macmillan distributors.


Melbourne-based Hazel Edwards has written YA novels and adult non-fiction including Difficult Personalities. Family friends, she and Ryan co-wrote online and via Skype webcam. Hazel is a 2010 Astrid
Lindgren Memorial Award nominee and  recipient of the 2009 ASA Medal..She also reads in the bath and goes to bellydancing 101