The month of celebration in honour of the launch of Pearl Verses the World continues today, with a visit by guest blogger, Sheryl Gwyther who shares a poem and some of the thoughts behind its writing. Welcome Sheryl.
A MURDER OF CROWS
This little gathering is a tribute to a bird at the bottom of the popularity list – a bird we can’t do without. Sheryl Gwyther May 6 2009

Scavenger of schoolyard waste,
your only threat walks upright
as shang-hai, rock & bullet you taste.

Humans have an almost universal opinion about crows – noisy, ugly, dirty, creepy, pests – the list goes on in many languages. But there are many who recognise the status of a crow … whether from the grandeur of a winged mystical being or the depths of an efficient garbage disposal unit.

SAYINGS
As the crow flies. European origin
I have a crow to pick with you. Old English
Jim Crow. American
To eat crow. 1812-1814 Anglo-American war
Crow-eaters. South Australians
Crow’s nest. Sailing term
A gathering of crows is called a MURDER

Q. Who brings Christmas presents to all good little crow boys and girls? Santa Caws
Q. Where do crows congregate to have a cold one? The Crow Bar
Q. What do crows like to drink in the morning? Caw-fee
Q. What sort of crow sticks to a wall when it hits it? Vel-crow

MYTHOLOGY
Crows and ravens appear in mythology, from Ancient Greece and Rome to the Native American, African, Hindu and Aboriginal Dreamtime legends.
In the cave paintings of Lascaux, birds are drawn that looks very much like crows.
An Inuit myth tells of how the Raven invented light by throwing chips of mica in the air.
Shakespeare mentions them in half of his plays.
Crows are mentioned in the Koran.

I write junior fiction rather than poetry although, like all poets, I love words. When I wrote the Crow poem I thought of what crows look like, what they do and how people feel about them. Also I knew about one very special trick crows have been intelligent enough to learn up here in Queensland.

Then, because there is so much to know about crows I collected more information and made an artist book to put it all in. It’s called Crow. 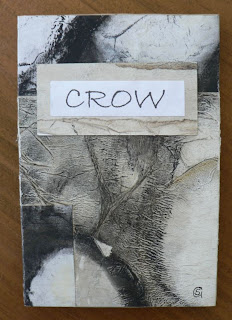 Thanks for visiting, Sheryl.