Welcome to my first Teacher Tuesday post for 2018 – and, of course, welcome to the new school year. If you have missed my previous Teacher Tuesday posts, links to those are at the end of this post, offering lots of ideas for using my books in your classroom.   This week, I am sharing suggestions for using Australia’s Great War: 1915 in your year six classroom, though of course the activities could be adapted for an older or younger class as well.

Using 1915 in a Year Six Classroom 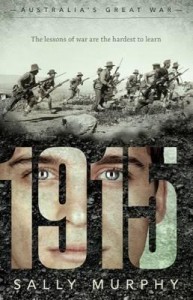 Blurb:    When Australia throws its support behind Britain in its fight against Germany, young teacher Stan Moore is one of the first to join up, swapping the classroom for adventure in Europe. But the 11th Battalion is sent with the newly formed Anzac Corp to Gallipoli where Stan is confronted by the hard lessons of war.  Though conditions are dismal and death is everywhere, so is the humour and bravery that is the true spirit of Anzac.

4.Reflect on ideas and opinions about characters, settings and events in literary texts, identifying areas of agreement and difference with others and justifying a point of view (ACELT1620)

5. Understand how language is used to evaluate texts and how evaluations about a text can be substantiated by reference to the text and other sources (ACELA1782)

Other suggestions for using 1915 in your classroom include:

Mostly, I’d love to remind you that while I love to see my books used in classrooms, I also love to see kids just enjoying them. Reading a book should be pleasurable – whether it’s being used in the classroom or not.  So allow your students to enjoy reading 1915

If you find this useful, or have any suggestions or comments, do leave a comment. And, if there is a particular book or year level or topic that you would like covered in a future edition of Teacher Tuesday, let me know.

Previous Teacher Tuesday posts include:  Pearl Verses the World, Looking Up, Toppling,  Roses are Blue, Do Not Forget Australia, The Sage Cookson Series,  Snowy’s Christmas and The Floatingest Frog.

Welcome to the second edition of Teacher Tuesday, where I match one of my books to a year level, and offer some activities for sharing the book in the classroom.

This week I’m focusing on one of my picture books: Do Not Forget Australia, With the centenary of the Battle of Villers-Bretonneux to be marked on ANZAC Day 2018, this is a good time to connect with this book if you haven’t yet, or to revisit it if you have.

Using Do Not Forget Australia in a Year Five Classroom

Available from good bookstores or here.

Other suggestions for using Do Not Forget Australia in your classroom include:

Mostly, I’d love to remind you that while I love to see my books used in classrooms, I also love to see kids just enjoying them. Reading a book should be pleasurable – whether it’s being used in the classroom or not.  So allow your students to enjoy reading Do Not Forget Australia.

If you find this useful, or have any suggestions or comments, do leave a comment. And, if there is a particular book or year level or topic that you would like covered in a future edition of Teacher Tuesday, let me know.

This week for Throwback Thursday I thought I’d share a very old photo. In fact, this photo is over 100 years old. 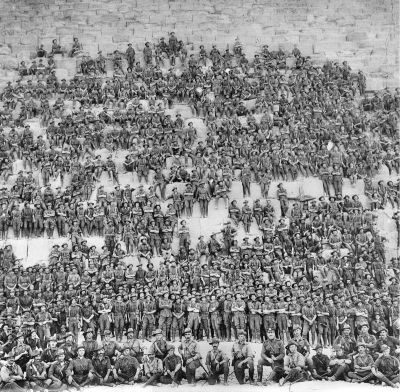 It’s a photo that, like many other Australians, I’ve seen many many times., I knew that this was a photo of Australian troops taken in Egypt during WW1, but when I began my research for my book 1915, this photo became for a me a starting point.

The photo was taken in January 1915, and features the men of the 11th Battalion of the AIF who were in Egypt preparing to join the war. They didn’t know it then, but in April those men would land at Gallipoli. Many of them would never leave.

As I researched WW1, looking for a place to start my story, I realised that if my character was from Western Australia (which he was) then he would have been in the 11th and, therefore, in this photo. So, at the start of 1915 I have my character, Stanley, climbing the pyramid with his mates, ready to have their photo taken.

Writing that scene was both a joy and a torment. A Joy because I knew that young men like Stanley were excited to be off on an adventure, seeing the sights of Egypt, climbing pyramids, being outside of Australia for the first times in their lives, excited about having their photo taken. But a torment, because while Stanley was fictional, the harsh realities of what later befell those very real young men in the photograph was something they could never have predicted, but which I, with 100 years of separation, knew and could hardly bear.

I have a copy of this photo which I take with me when I go to speak about 1915. Like me, people young and old are fascinated by the quality of photography from a century ago, and fascinated by the many details they can see – the looks on faces, the poses of the men, the things they are holding and wearing. And, like me, when they realise the future these men faced, their emotions are mixed.

This photo, and stories like 1915, remind us of the past in the hopes we can make a better future. 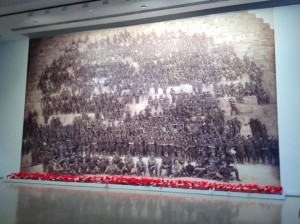 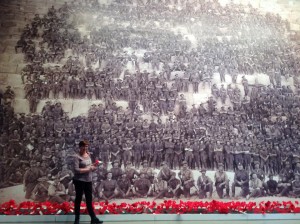 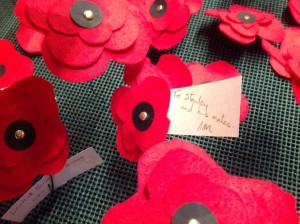