I have decided that every month is a busy month, so instead of beginning by saying “February was a busy month”, I’m going to start with: February was a month. But I can’t resist saying that it was a happily busy month, with plenty of excitement and good things happening.
The biggest thing in my writing life this month was the arrival of an advance copy of Pearl verses the World. Holding this little gem in my hands for the first time was awesome, and I’ve been carrying it around everywhere I go to show it off. The release date, May 1, is still two months away, but I’m celebrating already and can’t wait for it to go on sale.
Also very exciting, the final line art for my new picture book, Snowy’s Christmas, has been delivered to the publisher, another step in the road to publication complete. David is doing such a good job with the artwork, and I’m sure the finished product will be divine.
February was also a time for me to ramp up my promotion efforts. Promoting published books is a big part of every published author’s work, but it is a challenge to come up with different ways to build the buzz about a book. To that end, I started a yahoogroup for Australian authors and bloggers who want to be involved in blog tours, called aussieblogtours. In a short space of time we have managed to build a small but enthusiastic group, and have already had three tours.
Our first tour was to spread the word about my own, The Big Blowie. I visited five blogs in five days. If you missed the tour, you can still read the posts (and see how a blog tour works) at the following blogs:
Dee Scribe Writing
Let’s Have Words
Writing Children’s Books With Robyn Opie
Spinning Pearls and
The Book Chook
I also hosted the two other tours, by young author Brenton Cullen and the mysterious Tiffany Mandrake, which was lots of fun.
And, as if all that wasn’t enough, I went visiting to the Amory of Aardvarks blog on February 1
and again on February 8.
Amidst all this, I did manage to find plenty of time to write this month, with the Murphlets going back to school and leaving the house strangely quiet. I put the finishing touches on a verse novel and also a picture book, wrote some new poems and started planning two new projects. I also flitted up to Perth for a couple of day at the Apropos Poetry Festival organised by Writing WA, and to attend the February SCWBI WA meeting.
Finally, of course I read some wonderful Australian books and reviewed them for Aussiereviews. Seventeen new reviews were added in February.
That’s my news for February. Stay tuned in March, when I’ll be adding more interviews, writing advice and, of course, news. 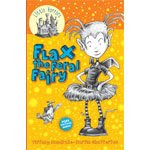 I am so excited to be hosting Tiffany Mandrake here on the second day of her blog tour to promote Flax the Feral Fairy, the first in her Little Horrors series, published by Little Hare.
Welcome Tiffany.

1. Tiffany Mandrake is a name that’s new to me and probably my readers. Can you tell us a bit about yourself? And is true that you are feral yourself?

TIFFANY: I admit to being a teensy bit feral, Sally, but what can I say? I was born quite a while ago, and I think I’m about 37 years old. I have a closet cousin who lives in Tasmania and writes books. Oddly enough, her name is Sally too, but there’s no good talking to her about me. She won’t admit we’re related. She older than me, and should know better. Let’s see though… I went to school somewhere or other, and I think I was expelled for bringing my pet dragon to school. (He bit the biology teacher on the bum.) I lived with a wizard for a while, but he used to cut his toenails in bed, so I turfed him out and sold his castle. With the proceeds, I bought myself a cosy creepy cottage in the grounds of Hags’ Abademy, where I still live. I have a Sphinx cat named Speedwell, and my dragon heats my water for me. My main occupation, apart from dancing in the moonlight, growing dodgy herbs and creeping out my closet cousin, is observing those around me, and writing about them in books.


2. Flax the Feral Fairy is the first story in your new series, Little Horrors. Can you tell us about the series?

TIFFANY: I heard all about Flax from the dog-fae when I first moved to the Abademy grounds. It seems the three Hags started the school because there were too many good fairies doing sweet deeds. A little honest badness was needed. Poor Flax the feral fairy was stranded in a sea of pinkness at Miss Kisses’ Academy, and the hags set out to rescue her. I was so pleased with this story that I wrote it down. After that, more bad fairies arrived, and I write their stories too. The Hags don’t mind. As long as I don’t reveal the actual address of the Abademy, they’re happy for me to do my writing. Of course, I always promise not to share the stories with anyone else.

3. Many authors (or would-be authors) have series ideas, but have trouble getting them taken up by publishers. How did you get your series idea accepted – or was this series commissioned?

TIFFANY: Actually, my closet cousin sorted that out for me. I never did bother about the details, so I’ll get her to answer this question. Cuz?

CLOSET COUSIN: All right. Before I answer this I must make it Quite Clear I am no relation to Tiffany Mandrake, no matter what she claims. However, I did help her propose her series. I warned her how difficult it is to get a series off the ground, because most publishers don’t want to commit to more than one book at a time. Many editors will try to make you tie up the ends of a story so it’s virtually impossible to write a sequel. Even if they do agree to look at another one, they usually want to “see how this one does first”, which may mean a gap of two or three years between Book 1 and Book 2. That’s time for Book 1 to go out of print.
I have had some luck with series in the past few years, and the editor of Little Hare, which published Tiff’s series, was the commissioning editor for another series I worked on for Scholastic. She seemed to believe Tiff might be able to produce the goods because of her (alleged) relationship to me. She contracted two stories first, then another two before the first ones were published. I put this down to sheer luck, or maybe Tiff put a hex on her? It may help that the Little Horrors stories are not (strictly speaking) sequels to one another. They take place in the same framework, but each story stands alone.

4. How does working on a story for a series differ from working on a one-off title? Do you plan several titles at once and know exactly what will happen when, or does the bigger story evolve with the individual episodes?

CLOSET COUSIN. I’ll answer this one too, as Tiff has never written a one-off story. There are different kinds of series. Some are serials, with a continuing story told across several books. Others are stand alone stories that concern the same characters. Often, the characters never change or age. Others still concern the same characters in the same settings but in separate stories. In these, the characters may age naturally and will remember things that happened in the book(s) before. Then you get series which use the same setting or reality, but which introduce new protagonists in each book. When planning a series of any kind, you have to make sure the basic situation has the “legs” to manage more than one book. When pitching a series, it is usual to have at least the first couple of books fully planned out, and maybe Book 1 completed. Later books may be sketched in as short synopses. In a series for this level (readers 7 – 11), there may be NO bigger story exactly. The framework is established in the first book, and each story makes use of that framework. In the Little Horrors series, the first book tells how the Abademy was established, and how the first pupil won her Badge of Badness. In the next book, the Abademy is a going concern, and the first MERMAID pupil is introduced. Each Little Horror is very different from the others, so her challenges are not mere carbon copies of those who went before.

5. Many of my blog readers are aspiring children’s authors. What advice would you offer somebody wanting to write for children?

TIFFANY: Move into a cosy creepy cottage at Hags’ Abademy. Bribe the dog-fae to tell you stories. Twist the arm of a closet cousin who is an author already. Hex a publisher into accepting your book. Easy peasy.

CLOSET COUSIN. Don’t listen to her. Tiff had outrageous good luck, or else she really DID hex the editor. The best advice I can offer is four-fold.

1. Immerse yourself in newly-published children’s literature. Decide why it works (or doesn’t work).

2. After doing your market study, write a genre that appeals to you. If you don’t love what you write, you’re setting yourself up for disappointment. Write what you love and keep that as your goal. If you get published, that’s wonderful. If not, you have still created something to be proud of.

3. Learn to write proper sentences, make sure your spelling is correct, and get to know plot, pace, characterisation, theme, tone and genre. You’d be amazed at the number of aspiring writers who miss all this.

4. Buy as many newly published books in your preferred genre as you can afford. The more new books you buy, the healthier the industry will be. Support the industry that you hope will soon support you.

TIFFANY: What she said, but a bit of hexing comes in useful too.

Thanks for visiting, Tiffany

Tiffany’s books can be purchased at Readings and other good bookstores.

If you would like to learn more about Flax and about Tiffany, catch the rest of her tour at: