Last week, at my day job as a university lecturer, I read The Floatingest Frog to my students, who are pre-service teachers, accompanied by two froggy puppets, and with all the voices and silliness I always use when I read this book. 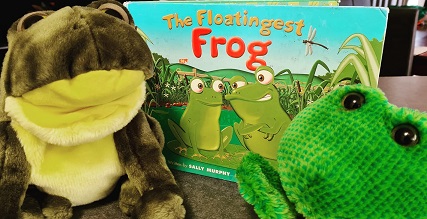 Afterwards, I realised I have been reading about Frankie and Ferdinand for seventeen years. No wonder I can now read it with my eyes closed.  In that time I have read it to audiences and classes of all sizes, and all ages and stages, as well as to my own children and, more recently, my grandchildren.  The good news is – I have as much fun reading it now as I did seventeen years ago.

The even better news is that it is, amazingly, still in print.

And the best news of all is that I still get to read not just this book, but my other books as well, at Bookweek, which is only days away, as well as other times. No wonder I love being an author.

(PS, If you are a teacher and want to use this book, you can find teaching ideas here or purchase it here. It isn’t just a fun read – it can also link to units about frogs, and is a retold Aesop’s Fable) 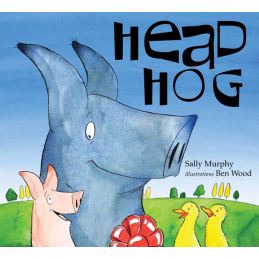 I still smile whenever I see the cover of Head Hog which, if you haven’t been following here, was released late last year. Illustrator Ben Wood did a fabulous job of the illustrations and the finished product is very cute.

If you’ve not yet had a chance to read the book, this could  your lucky week, because all this week, Kids Book Review (KBR) are running a giveaway. All you have to do is visit their site and explain why it’s important to have fun.

Go on, enter. You know you want to!

Another link to an article you should read if you want to write for children.
Today’s link is to a blog post on the Children’s Writing Web Journal. The post, Writing Page Turning Picture Books was written back in June, and discusses four ways of giving your picture book text the page-turning quality that makes a picture book work.

You can read the piece here.

Have added eleven new reviews to Aussiereviews this evening.

I think my favourite from this batch is Corinne Fenton’s The Dog on the Tuckerbox. What a beautiful picture book.

How wonderful – yet another Pemberthy sighting has been reported, this time in Warrnambool where Pemberthy was seen at Collins Bookstore. Thanks so much to Corinne for reporting this sighting after reading about by search in Pass It On newsletter.

Warrnambool is in Victoria, east of Melbourne. The new dot is the orange one on the south east coast. Don’t forget to let me know if YOU have seen Pemberthy.

What a busy week! It’s the middle of year school holidays here and, with the Murphlets at home all day, my working routine has been disrupted. It seems I’ve spent half of the week in the car ferrying people hither and thither, as well as playing endless board games with Murphlets 5 and 6, who have played a game called Trouble almost non-stop. Then there’s Murphlet 3 who has landed himself in hospital today with a secondary infection from a bug he had earlier in the week. He woke up battling to breathe this morning and, though he’s better since the doctor put him on antibiotics and cortisone, is spending the night at the hospital for observation.

Anyway, I’ve not exactly had long interrupted hours at my desk this week, but rather than letting this worry me, I’ve been enjoying the time with the Murphlets and the breaking routine. Plus, the time in the car is good because I find driving great incubation time. I had to pick Murphlet 2 up form a sleepover today – an hour and a half’s drive each way So with three hours driving, I also had three hours to think about a new story. I’ve had a character and a name for a year and been promising myself that I’d find this character’s story some time. On the drive today I started thinking about him and wondering just what it is he wants the world to know about him. An idea began to tickle and I shared it with the Murphlets who were in the car (numbers four, five and six) who gave their opinion. Then on the drive home I tickled it out some more and shared it with Murphlet Two, who also gave her input. When I visited Murphlet Three at the hospital I shared the idea with him and he also responded.

When I finally got some time this evening to sit at my desk, I was able to type up the whole first draft of a new picture book. It’s rough – hey, it’s a first draft – but I can see it taking shape. Only another hundred drafts and it’ll be ready to submit!

Tomorrow will be another busy day, divided between the hospital and home (hopefully Murphlet 3 will be well enough to come home – I miss him and hated leaving him at the end of visiting hours tonight). But whatever I’m doing, I know I am always a writer, whether it’s an idea incubating, an experience which I can use in a future story, or an emotion that might one day shape a character. And when I do get time to sit at my desk I appreciate it all the more after a busy spell – and really use the time productively.

Have a nice weekend.