During my recent spell at the Literature Centre in Fremantle, I really enjoyed talking about my book 1915 and about developing setting. One of the passages I read was from the opening pages. In this scene, Stanley (my main character) and his friends are climbing a pyramid to have a photograph taken. While Stanley is a fictional character, the photo he is posing for is very real. It is the famous photograph of the 11th Battalion AIF posing on the pyramid of Cheops, taken in January 1915. 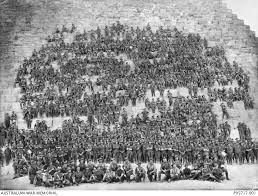 When I was looking for a starting point for the novel, I realised that this photograph, which I had seen and marvelled at many times, was a perfect opening scene. Stanley, my character, is from WA and consequently a member of the 11th. If he were real, he would have been in that photo, in January 1915. A perfect starting point.

So Stanley climbs the pyramid and poses for the photograph. As he does, of course, he can survey the landscape, including the training camp where he is based. He can also give details about other elements of the setting – the sounds, the smells, physical sensations, emotions and more

I read this scene to seven different groups of students, and asked them what they learned about that setting from what I read. Here are some of the things they came up with:

Every group found different things – because as well as what was in the words, their personal experiences made them imagine things which the words merely implied. For example, a student who had been to Egypt said she could taste and smell the food that the hawkers were selling.

The reading and discussion were precursors to a writing exercise in which the young writers wrote their own descriptions of favourite places. And what descriptions they were! Rich not just with visual description but with sensory detail which made me want to visit (or revisit) the places they described. (As an aside, these pieces, and those written by TYP participants from around the state will be displayed as part of WA Week Celebrations in June).

Think about your own writing. When you build a setting, are you evoking a range of senses? Remember your old science lessons where you learnt about the five senses (and then think beyond that to senses you may not have covered, including emotion, temperature and more). And how do you deliver this information? Is it all in a big block, or is the information gleaned from what the action?

One other thing I learnt from these workshops is that being the teacher doesn’t exclude you from learning things yourself. I am now busily thinking about setting in my work I progress.