One of the fun things  about having a foreign edition of a book released is that you get to celebrate its release all over again
Today, I’m celebrating the release of John and Dom, published by Walker UK. 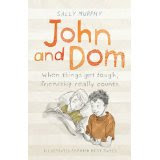 If you’re an Aussie fan you might be a little puzzled right now, because here in Australia the same book has both a different cover and a different title. That’s right, John and Dom is the UK version of Toppling.
The reason for the change of cover and title is to bring it into line with the UK version of Pearl (which in Australia, was of course called Pearl Verses the World).

Anyway, regardless of what it’s called (a rose by any other name etc) I am really happy that John and Dom is now available for sale in the UK. If you are in the UK you can buy it here or in a good bookstore near you.
What’s it about?  So glad you asked. John and Dom is about a boy named John who is obsessed with domino toppling, and his best friend Dom (yes, his name is a little bit like domino), who is in danger of toppling himself, when he’s diagnosed with cancer. Using the verse novel format and a smattering of humour, the book deals with what it’s like to try and support a friend through a really hard time.
In Australia, Toppling has been really well received by young readers and by adults, too. It has won awards including The WA Premier’s Book Award (children’s book category), the Queensland Premier’s Literary Awards (children’s book category), and  the Junior Judges Award (Younger Readers Category) .
Here’s hoping that John and Dom is just as well received in England and the UK.